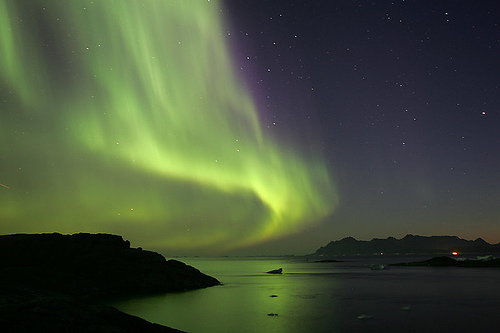 When I was a kid, I thought aurora borealis were extra special, super-high-in-the-stratosphere ribbons of ice reflecting wild lights from outer space.

Now I know better, but no matter how much we learn scientifically about the Northern Lights – no matter how measurable they are, or they may become mappable – when I see the Northern Lights, factual data doesn’t matter much. The knob on fact knowledge gets turned down to almost zero and the dial for “wonder” zooms up to the 10 when the non-icy curtains of sheer, brilliant light curl and breathe across the icy sky. And many others experience this too.

Peter Mettler‘s film Picture of Light reminded me tonight about how that surge of curiosity and delight can temporarily muffle, or even displace, intellectual knowledge. And I would argue that’s a beautiful thing.

Picture of Light is saturated with stunning scenes, of aurora borealis and much more. The film describes Mettler and his crew in Churchill, Manitoba, hanging out with their specially housed cameras that can take temperatures to minus-40 C.

The film prioritizes mystical or magical explanations. “Before science explained, the Northern Lights were interpreted as visions, prophecies, spirits — a trigger for the imagination — images provided by nature framed by no less than the universe itself,” Mettler’s voiceover says, and the idea is so central that it’s repeated on his website as a teaser.

When a long blizzard forces the crew indoors for several days, the storm gradually takes shape as the second main character beside the Northern Lights. Claustrophobia, or winter fever, keeps tension between enforced stillness and the things the humans do to stay in motion: even to the point of shooting a hole in the hotel wall, enlarging it with a crowbar, and waiting to see what snowdrift shape will appear. All with the hotel owner’s blessing and participation.

Snow drifts into piles higher than cars. We see ice on a lake during a long helicopter flyover scene. Frost covering windows, frost so intense that one shot lingers on a scratched white surface with a blackish background and visual perspective is so dissolved that the frost might be a landscape, a floor, a snowscape from here to the next road. There are two faint, slightly blue lights in the iced scratches. It isn’t until the camera pulls slightly away that we can see they are reflections on Mettler’s glasses.

I’ve hit a slow spell with inspiration for The Ice Cubicle. That’s in part because teaching is full-on right now, but I think largely it’s because an element of familiarity is settling in. While I don’t see glaciers in my daily walk to work and back, I see the frozen Yukon River and the hunks of ice pushed along roadsides by trucks or snowplows. I’m habituated to the icicles on the bright blue Yukon Energy building, not to mention the endless supply of tiny icicles that frost up our scarves, hoods and noses when we walk through deep chill weather.

So maybe I’m skating over a period of ice-image-saturation. What do I do now? I promised myself I’d write about ice for a whole year – until May 2010.

Back to a script quote from Picture of Light:

We live in a time where things do not seem to exist if they are not captured as an image.

But if you look into darkness you may see the lights of your own retina — not unlike the Northern Lights, not unlike the movements of thought. Like a shapeless accumulation of everything we have ever seen.

Lately I’ve been using images of ice from all over the world to frame my questions about the poetics of ice, the physical nature of ice, the integration of ice into art and art into ice. The process is becoming a little too abstract and general, a little too locked into one part of my thinking; the intellect is voicing suspicions about the creativity that ice can and does inspire in many.

Last weekend I entered a 48-hour Short Film Competition through KIAC (the Klondike Institute of Art and Culture, in Dawson City). Of course, that means I was actively capturing images all weekend. But I was also treating ice as a sculptural element. Playing with it and allowing spontaneous, even ridiculous responses. After all, one of the main characters was a 7-foot high snow monster. With foodcolour-blue ice for eyes.

When Mettler talks about seeing external images and then seeing the lights of our own retina, it reminds me that my writing is best, my ideas most fresh, when all this pixelated eye-drenching research blends with bodily experience. It reminds me that haptic, tactile and sensuous knowledge wakes up new ideas.

Poetics of ice are not separate from poetics of sky, light, snow, wind – and bodily experienced wonder, tension, brightness, darkness and cold.