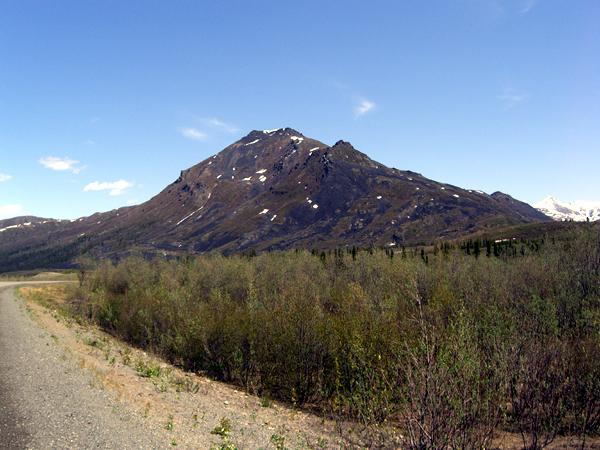 Early June this year was the first time I had a chance to drive up part of the Dempster Highway, a packed gravel road that connects the southern Yukon with Inuvik in the Northwest Territories.

The Dempster is a pathway to the NWT, but it’s also a destination, an experience. It’s the closest vehicle-accessible area of the Yukon where you can see miles of tundra, vast glacier-carved valleys, sharp-edged mountains that outsize any of the hillocks in the southern Yukon. Locals appreciate it for beauty and for hunting caribou, Dahl sheep, moose … tourists and new Northerners like myself head there for the beauty and the … strangeness? of its expanse.

It’s unavoidable but inefficient to call the landscape striking. Because all Northern landscape is remarkably uncultivated in comparison to the majority of the planet, there’s always a sense of vastness that is difficult to find in other locations, and it’s compelling. It’s also interpreted/experienced as terrifying, beautiful, amazing …

To fill in some of the ellipses that kept appearing in my thoughts (wordlessness abounds as you gaze out the window of your truck, trying not to stop every 40 seconds to take another photo that wouldn’t capture it anyways) I flipped open the thin booklet called The Dempster Highway Travelogue and absorbed some of the landmark labels.

At km 66.0 a rock glacier appears on both sides of the highway. According to the guide:

Originating in a bowl, or cirque, of the mountain, this undulating tongue of rock fragments moved much like a glacier. But, unlike a glacier, a rock glacier is composed of rocks and only has a core of ice.

And apparently another rock glacier slowly flows at kilometre 67.5. Not so much information, but we drove on and were contentedly diverted by looking for sheep (didn’t see any) and moose (saw two, at Two Moose Lake, no joke) as well as plenty of tundra, of course.

When we drove a friend up the Dempster for a couple of hours on Monday, to wrap up her 5-day trip to the Yukon, I saw the rock glacier again and remembered that I wanted to know more about how it works.

A rock glacier takes a combination of cold climate, a copious supply of rock debris, and just enough of a slope. Like ordinary glaciers, there is a large amount of ice present that allows the glacier to flow slowly downhill, but in a rock glacier the ice is hidden. Sometimes an ordinary glacier is simply covered by rockslides. But in many other rock glaciers, water enters a pile of rocks and freezes underground—that is, it forms permafrost between the rocks, and ice builds up until it mobilizes the rock mass. (I love it when scientists write clearly. This info’s from geology.about.com)

If you’re interested in more formal scientific language, a rock glacier can be described as “a tongue-like or lobate body, usually of angular boulders, that resembles a small glacier, generally occurs in high mountainous terrain and usually has ridges, furrows, and sometimes lobes on its surface, and has a steep front at the angle of repose.”

These formations usually move at a rate of less than one metre per year. (This from the American Geophysical Union, which in this definition attempts to find a generic description so that rock glaciers on Earth and Mars can be compared – intriguing!)

A diagram from the same site helps add context and logic:

Back to the Dempster Highway dreaming, here’s a pretty photo of a powerful, but slow-moving, force of nature, seen in context in the first photo on this post, but a little closer now:

The rough “gravel” stones seemed to range from 2 to 5 feet wide/thick/high. If a flow of stones that takes years to move can be called a cascade, I’d like to say … a cascade of slow dark stones makes any version of human slowness seem as fast as a flock of highstrung kids sucking back helium from balloons to feel the tremulous trebles of voice-shift …

or, more simply, that the experience of looking at this photograph of a rock glacier does so little to communicate how bulky and enmassed the landscape around the Dempster Highway feels as you drive through it … but perhaps it’s visual and verbal node for initiating a dreamy understanding of one natural ice phenomenon …