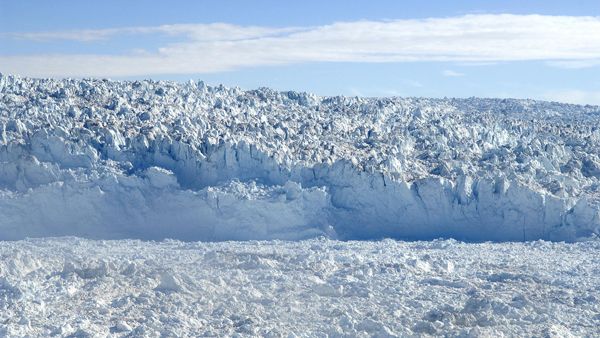 About 10% of the world’s fresh water is stored in the Greeland ice sheet: a cap of freshwater ice that covers more than 50,000 km² of inland Greenland’s landmass.

If the Greenland ice sheet melts completely, predictions are that the release of that 10% of water will raise our planet’s sea level about 7 metres.

Scientists seem to agree on these points; debates – and the research – centre on anticipating how quickly the Greenland ice sheet is melting, how fast it will melt over the next decades, and whether that melt can be slowed.

(Image of the ice sheet’s summit from Greenland news agency Sermitsiaq’s website, on Sept 29/09. The temperature was a record minus 46.0 ° C.)

On September 23, The Guardian reported that scientists from several international research groups used data from Nasa’s ICESat (Ice, Cloud and and land Elevation Satellite) to piece together a picture of the changing fortunes of glaciers on the ice sheets. The satellite bounces laser light off the ground, producing surprisingly precise measurements of land, ice and water surfaces.

In Greenland, glaciers in the south-east were found to be flowing at speeds of more than 100m per year, during which they thinned by 84cm. More slow-going glaciers lost around 12cm a year.

Research about the Greenland ice sheet’s melt has been in the news regularly this year, as the science community knows those vast kilometres of ice contain important information about climate change. The Globe and Mail also reported on Sept. 23 (unfortunately without much detail) that:

New satellite information shows that ice sheets in Greenland and western Antarctica continue to shrink faster than scientists thought and in some places are already in runaway melt mode…. Research found that 81 of the 111 Greenland glaciers surveyed are thinning at an accelerating, self-feeding pace.

That’s a dramatic statement – 81 of 111 Greenland glaciers are thinning more quickly than previously expected. Not a pretty number to present to anyone who’s living on a coastline.

The Greenland ice sheet is unique for other reasons too:

In Copenhagen this past March, Konrad Steffen, an ice expert at the University of Colorado, told a global warming conference what his team had found when they used a special camera (with NASA’s help) to record what was going on inside the Greenland ice sheet.

The footage, taken 100m inside the ice,  revealed a complex subglacial network of interconnecting tunnels carrying water from the surface to deep inside the ice sheet. Here’s a link to a brief video inside that cold waterworks: http://www.guardian.co.uk/environment/video/2009/mar/12/greenland-glacier-channels

“The discovery could explain sudden and severe increases in ice movement seen during peak summer,” Steffen said. “Water channelled from the surface to the base of the ice sheet could speed up the way it slides across the bedrock. On a large scale, this could cause the ice sheet to break up much faster than expected.” The article continues:

Combined with images from a ground-penetrating radar dragged across the ice surface, Steffen’s results showed that the moulin quickly widened beneath the surface. Several side channels carried water away to other parts of the ice sheet and fed the moulin from other holes on the surface. “The whole ice sheet is connected with these open channels,” he said.

A slightly earlier Guardian article, from Sept. 1, focused even more closely on the Greenland ice sheet and the Sermilik fjord in particular. Reporter Patrick Barkham interviews Gordon Hamilton, a Scottish-born glaciologist from the University of Maine’s Climate Change Institute, and Hamilton’s discoveries are arresting:

“When we arrived there was no glacier to be seen. It was way up the fjord,” Hamilton says. “We thought we’d made some stupid goof with the co-ordinates, but we were where we were supposed to be.” It was the glacier that was in the wrong place. A vast expanse had melted away.

When Hamilton and Stearns processed their first measurements of the glacier’s speed, they thought they had made another mistake. They found it was marching forwards at a greater pace than a glacier had ever been observed to flow before. “We were blown away because we realised that the glaciers had accelerated not just by a little bit but by a lot,” he says.

The three glaciers they studied had abruptly increased the speed by which they were transmitting ice from the ice sheet into the ocean.

As Hamilton has found, Greenland’s glaciers have increased the speed at which they shift ice from the sheet into the ocean. Helheim, an enormous tower of ice that calves into Sermilik Fjord, used to move at 7km (4.4 miles) a year. In 2005, in less than a year, it speeded up to nearly 12km a year. Kangerdlugssuaq, another glacier that Hamilton measured, tripled its speed between 1988 and 2005. Its movement – an inch every minute – could be seen with the naked eye.

In other words, the major change in terms of global ice activity is that the Greenland ice sheet is now shedding more ice than it is accumulating.

The melting has been recorded since 1979; scientists put the annual net loss of ice and water from the ice sheet at 300-400 gigatonnes.

This could mean that the sea level will rise up to 2 levels in the next decade. Correct me if I’m wrong, but it looks like we’ll be seeing something no living generation has a memory of – what will we do with this unique situation, besides palpitate with anxiety?