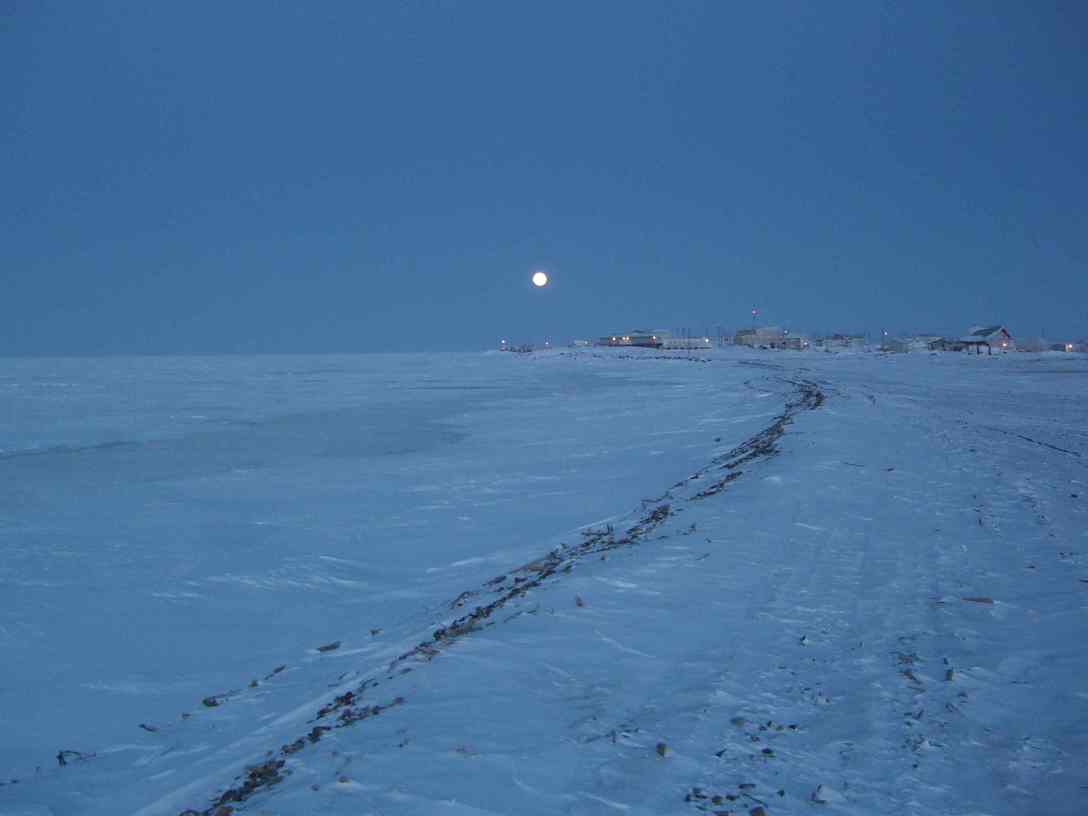 We’re stuck in Tuk! And ice-sculpting is the current prescription for preventing cabin fever.

We arrived safely in Tuktoyaktuk around 4:00 on Wednesday after 5 slow, bumpy hours on the Ice Highway (pix to come later). It took about an hour of waiting around at the North Mart until we got through to the cell phone of the person who could give us the keys for the super cute, comfortable Tuktu B&B – the only accommodation in town. The wait was fine, because it gave us a chance to stock up on groceries for these next couple of days.

We also drove around a bit, getting a feel for Tuk’s curlicue layout. The full moon was gorgeous, the sky a deep, resonant, saturated blue that only happens in the North (it’s dark, yet not dark). The wind was stiff and I felt intimidated. There was some comfort in hearing others coming into the grocery store and complaining about the wind – comfort because I thought, okay, maybe it’s not like this all the time, or they wouldn’t remark on it.

Yesterday we woke to slightly less wind, but little visibility. Sugar-fine snow was flustering the air and I could see as far as about 4 blocks. All my sculptural ideas become blended with pure curiosity when I’m in a new place, so my general habit is to put my artistic plans into a “holding pattern,” so to speak, and see how they are altered or even displaced by what I experience first-hand as I explore.

I had considered on the drive up that the light here would probably not be intense enough to bend into visible patterns through ice lenses or even ice blocks. Sure enough, when I went for a walk around 2:30 when the wind died down a little, my thoughts about ice and optics were given a talking to by the reality of the ecosystem here.

This is how bright it was at 3:00 yesterday, though it’s a shot taken looking north to capture the full moon; the sky was a bit brighter behind me:

and this is how bright it was at noon today! 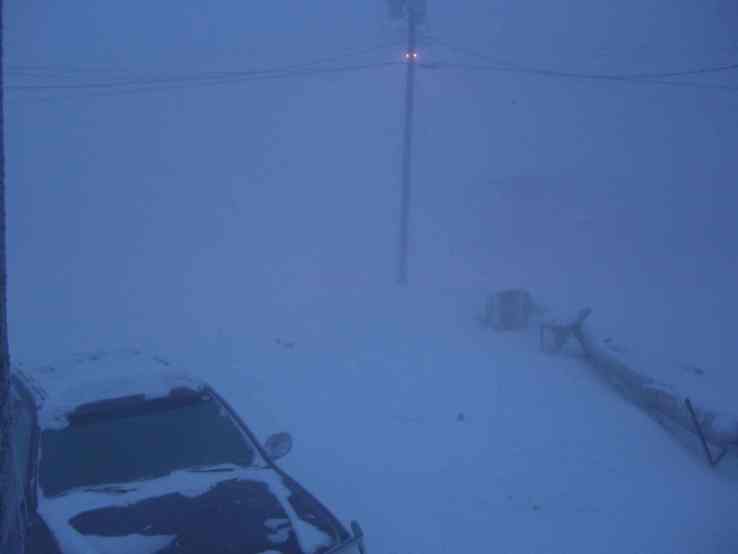 In fact, this is the beginning of a blizzard that will likely stick around for 2 or more days. An exploration of ice optics might not exactly stay at the top of the list when we consider that we’ll be stuck in Tuk until at least Sunday … all of us due back at work on Monday … the fridge almost empty and all stores closed for the New Year’s Day holiday….

But on the other hand, why not ice-sculpt to my heart’s content? What else is there to do besides watch videos, read last weekend’s “end of the decade” newspaper, chat with my bf + our artist friend about the video art projects said friend is doing up here?

I cast about 20 ice “slabs” (18 x 12″) yesterday but can’t build a structure with them today, so I’ve just been playing with technical things around handling ice globes and lenses. I’ve cast about ten of them over the past two days with the help of this intense cold weather. Each one is a slightly different thickness of ice; the thickest is a totally solid globe. I’m sawing most of them in half to form lenses.

Turning an ice globe into two rounded lenses means finding a way to smooth the edges of the hand-sawn halves. Anything at room temperature is warmer than -30 C ice, so I just used a pizza sheet to melt the surface down. I was wishing for a rough flat stone or a piece of sandpaper, but this method allowed the ice dome to melt its edges into a fairly uniform surface:

The ice globe itself is such a seductive, pleasing shape that I’m keeping some of them whole and piercing small openings into their hollows. They won’t all be lenses, but they’ll morph into something new, I’m excited!

View all posts by goodcoldwater