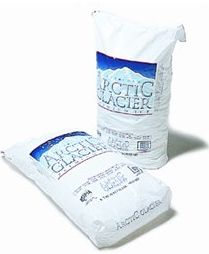 Remember that time last summer when you were rushing to a friend’s barbeque and realized you were out of ice? Chances are you didn’t have enough in your own freezer to pack a cooler full enough to chill your pop/beer/white wine, so you stopped at a gas station or grocery store and bought a back of pre-made ice.

Did you notice the price? Here in Dawson, there’s always one place that’s cheaper than the other – but then the cheaper place closes earlier – so you really do have to plan.

It appears that large companies who sell massive quantities of ice have a particular temptation on their hands: they can push ice prices up quite a bit before people complain, or even notice.

On Oct 13/09, Arctic Glacier International Inc., headquartered in St. Paul, Minn., agreed to plead guilty and to pay a $9 million criminal fine for allocating customers. In addition, three executives of Arctic Glacier International – Frank Larson, its former senior vice-president of operations, and Keith Corbin and Gary Cooley, both former vice-presidents of sales and marketing – pleaded guilty to participating in the conspiracy.

The conspiracy was “to suppress and eliminate competition by allocating packaged-ice customers in the Detroit metropolitan area and southeastern Michigan, beginning Jan. 1, 2001, and continuing until at least July 17, 2007” according to several news sources, quoting a release from the Department of Justice of Ohio, as quoted on the FBI website.

Arctic Glacier International Inc. is a subsidiary of Arctic Glacier Income Fund (TSX:AG.UN) so it’s interesting to read this Globe and Mail article from Oct. 21 that puts a Canadian spin on it. To date: “no Canadian antitrust allegations have been announced.”

Oh, and let me know what you think about having the article embedded with Scribd (which is zoomable). I’m testing this because several news sources, including the Globe, only allow free access to their articles for a limited time.

View this document on Scribd

Arctic Glacier International has an impressive spread of operations, as you can see from this map (from the company’s site). To date: “no Canadian antitrust allegations have been announced.”