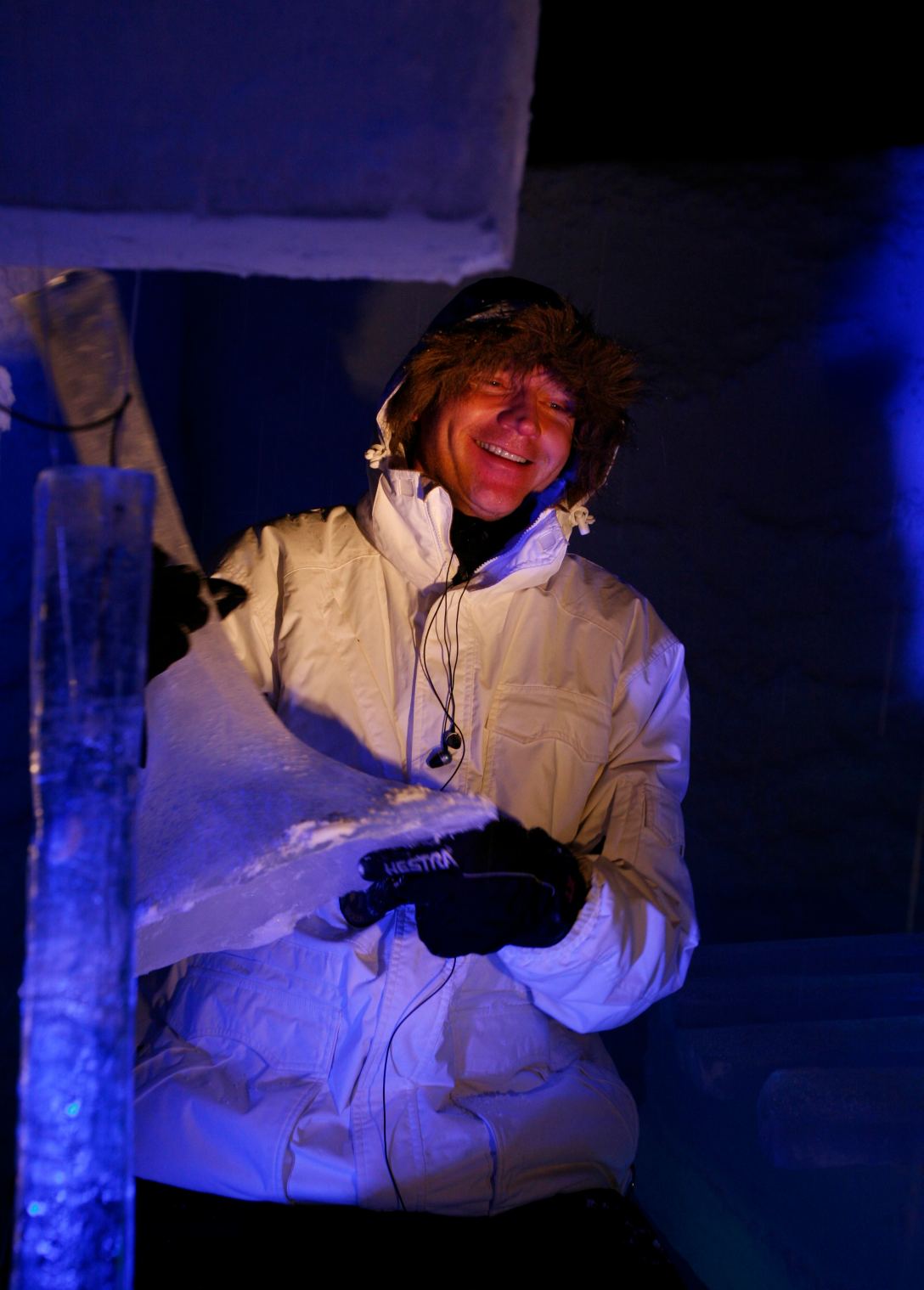 One thing that strikes me about at Norwegian percussionist Terje Isungset‘s invented instruments is how personalized they are. Isungset is one of only a handful of people in the world to make ice percussion instruments. And I’m pretty sure he’s the world’s sole crafter – or at least the master crafter – of ice trumpets.

But his music sounds older than a human lifespan – sometimes ethereal, sometimes windy, sometimes like a howl – and it’s hard to say why, but it must have something to do with the instruments’ materiality.

Isungset nurtured his passion for making music out of natural elements over many years, so when he began exploring the possibilities of ice music, it didn’t take long before he started an IceMusic Festival in Geilo, Norway.

The first edition of the IceMusic Festival was in January 2006. One if the central themes of the festival is to celebrate and align with nature; on this note, the event is always scheduled to happen on the first full moon of each year. Some of you may have seen the Ice Cubicle post about this last June; discovering this imaginative, “impossible-music” festival has added a huge amount of inspiration to this blog in subtle ways over the months.

I interviewed Isungset just before this year’s IceMusic Festival, held January 29-30, 2010. Bill Covitz, an American ice sculptor who has worked with the festival since its inception, came to Geilo a week before the festival to make the stage, the ice harp and the decorations.

More than 150 visitors at the main concert saw Isungset, harpist Sidsel Walstad and vocalist Lena Nymark perform Wintersongs. The songs were from Isungset’s new album by the same name; it’s his sixth CD on the ice-music-only label that he started, All Ice Records.

Isungset spoke in a detailed way about listening carefully to the ice. My favorite part was how the physical qualities of the ice demand improvisation.  “I always have to improvise because I don’t know exactly how the instrument will sound,” he said.

“It depends on the weather conditions, but even more than that, the instruments are always brand new or very new. If you play a violin from the 18th century and you’ve played it for 20 years, that’s different, you know what to expect. For me, I just have to listen to the instrument each time – you can decide a little bit beforehand but not too much.”

And there’s more. Here’s the interview, with thanks to Terje for having the patience to Skype in his last hour before catching a train to Geilo for the festival weekend.

Ice Cubicle: When did you first start using ice as a musical instrument?

Terje Isungset: In 1999 I was invited to play at a concert in Lille in a frozen waterfall. I used natural elements: sounds from the waterfall, also some stones and wood alongside other musicians, and I also tried ice! It sounded amazing, so I just had to continue the work.

I am a percussionist, a drummer, so I started with the ice percussion. In Sweden they have very high quality ice there, so I did some work with ice music for The Ice Hotel [in Jukkasjärvi].

The next year I went there to record what I think is the world’s first ice music CD – a work called Igloo. After that we did build one ice harp with a Swedish artist named Bengt Carling. And then made blowing instruments out of ice.

Ice C: These performances happened before you started up the first IceMusic Festival in 2006. How did the Festival begin?

TI: The idea of the ice music festival I had in 2005, so I asked a couple of winter-sport resorts in Norway if they would have an ice music festival. They were very positive but said, ‘We have to make the financials work out first, so you have to wait.’ Then I met Pål Medhus from Geilo, and he said, ‘Okay, let’s do it.’

He’s still running it and I am doing the programming and the creative direction. It is an amazing way to work out my ice music ideas.

Ice C: What physical qualities of the ice instruments influence the music that you compose?

TI: I try to create different moods in music, I am searching for the soul in the ice, so I try to find the ice that can sing. But nature decides how the sound will be – it decides the quality of the ice in the first place, and then the weather on the day of the concert decides how the ice instrument sounds. If it’s mild, it won’t sound good; if it rains it won’t work at all; and in the wind the instruments will break.

Ice C: The most dramatic forms of natural ice are found in extreme geographies and weather conditions. Does ice music generate an audience expectation of music that will invoke wilderness or natural spaces? Do you work with that association yourself when you use glacier ice to make a trumpet, for example?

TI: I work with ice for a few different reasons. The main one reason is that I think it sounds very nice, and also sounds very different from other instruments. This is how I always work when I make or play music: I work with instruments that sound more personal, because then you have no references to other types of music.

Also with the ice, as with the other music I try to express myself through music but without using any kind of thinking. I am going around the intellect, I am just a medium for the music itself to be expressed. When you work like this, it’s more connected with the past maybe, or more connected with the ground somehow, it’s not my intellect that’s making the music, it’s something else and it’s going deeper. 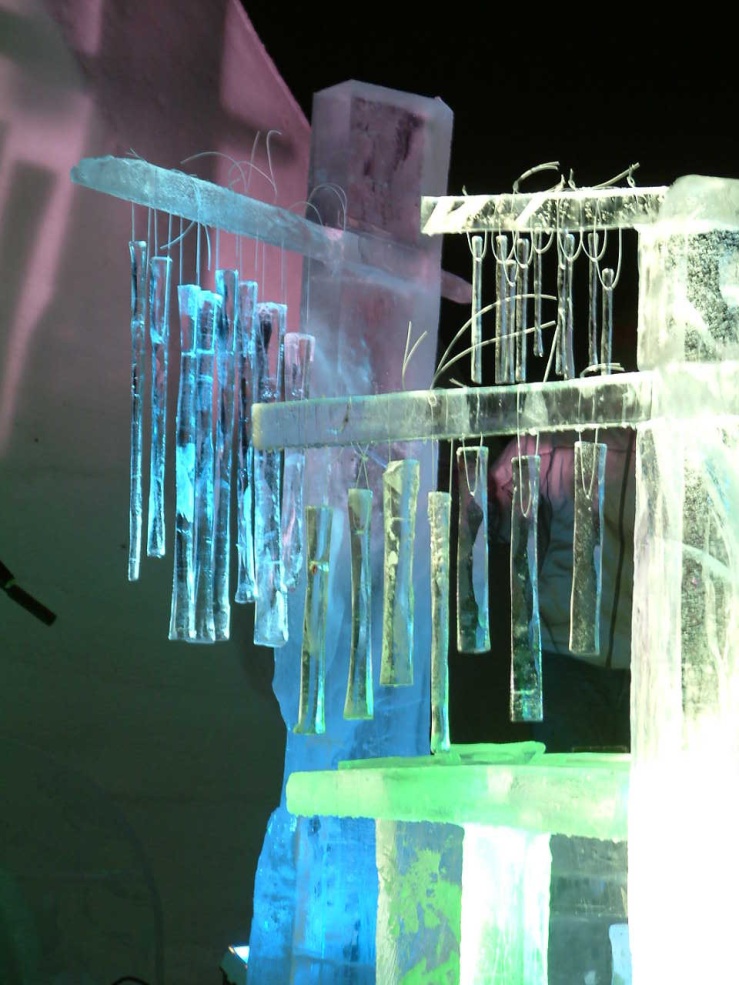 The ice is water, the most important resource in the world. There would be no ice without water, and the water has been through many human beings or animals and has been around the world and been around for a long time,

Also I try to see it from this perspective: human beings have been on earth a very short time and for sure the earth will exist for a long time after we exist, so the water will be here too.

Ice C: Ice instruments played with human breath sound almost like human vocalization at times. And ice percussion sometimes sounds metallic. [Readers, have a listen to a five-minute clip from this year’s festival and you’ll get a sense of what I mean.]

So Terje, what causes this range of tones in ice?

TI: Ice is not a stable thing. You have to work with each ice instrument and listen carefully. After ten years I know a lot more about what the ice instrument will sound like, but still, it changes from place to place and even from day to day.

I have no idea why it’s different. I have used factory ice for some concerts and it has no sound in it; the quality is perfect but it doesn’t resonate. Maybe the ice has a kind of a soul; there are temperature changes and things that happen during the formation of the ice that we cannot know about or control.

Ice C: Is old, compressed ice from a glacier better for ice trumpet than fresh, new ice from a lake?

TI: I have made a couple of horns from glaciers in Norway, but no, I would not say it sounds better. It depends what kind of instrument you make out of it, actually.

But I will work more on this for my next album. I want to focus more on the environment and try to make instruments out of glaciers that are in danger – melting glaciers. Then we will have the chance to know more about the glaciers.

Ice C: So you’re an ice-climber as well as a musician?

TI: No no no, I’m not the one who climbs the glacier, someone does that for me. Normally the glacier is hard to get and it can be that we haven’t found the right ice.

I would be willing to talk about coming to Canada and perform an ice concert in the glaciers of the Rocky Mountains for free if it could be arranged that someone can get the glacier ice for me.

Terje Isungset has worked with visual artists, dancers and singers, over the years. He is currently on a solo tour in France, and then  will be at the Icefestival Val Senales in Italy before returning to Norway for a project with musicians, dancers and choir performing his music. Details are on his website http://home.online.no/~isungz in English and in Norwegian.

And in sound – there are some fantastic, ethereal sound samples on this site that are well worth a listen.