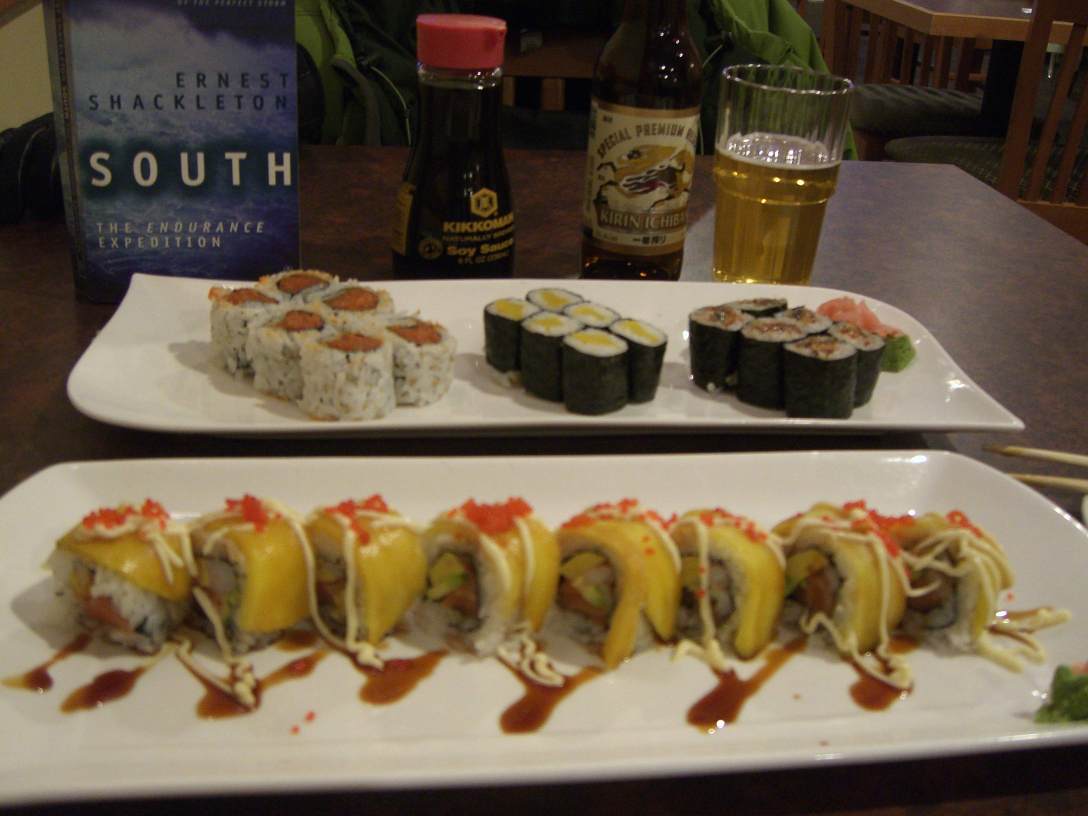 I took the book South out of my bag and immersed myself in its prose as I waited for my sushi to be prepared. The sidewalks outside were icy, but indoors everyone was jacketless. In another time, near another continent, Ernest Shackleton and his men were not so comfortable:

We ate a cold meal and did what little we could to make things comfortable for the hours of darkness. Rest was not for us. During the greater part of the night the sprays broke over the boats and froze in masses of ice, especially at the stern and bows. This ice had to be broken away in order to prevent the boats growing too heavy. The temperature was below zero and the wind penetrated our clothes and chilled us almost unbearably.

One of our troubles was lack of water. We had emerged so suddenly from the [ice] pack into the open sea that we had not had time to take aboard ice for melting in the cookers, and without ice we could not have hot food.

The Dudley Docker had one lump of ice weighing about ten pounds, and this was shared out among all hands. We sucked small pieces and got a little relief from thirst engendered by the salt spray, but at the same time we reduced our bodily heat…. 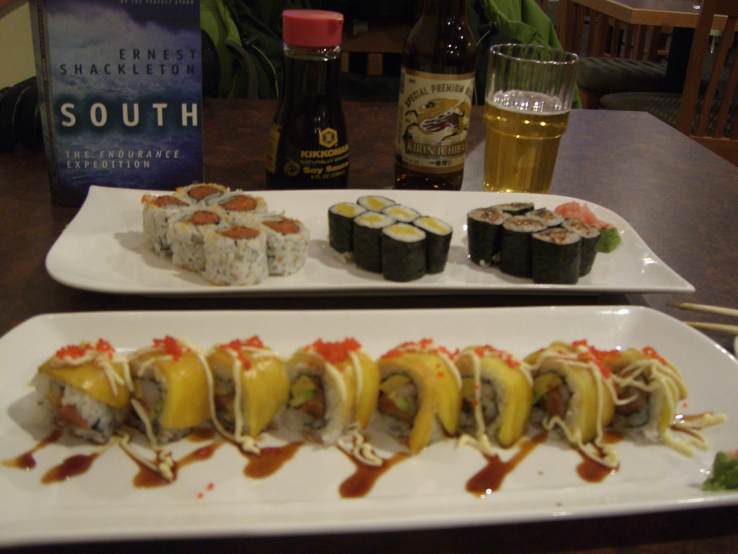 Beautiful crab rolls wrapped in luscious mango … spicy tuna and deliciously oily eel … almost one hundred years after Ernest Shackleton and his crew attempted Antarctica on the Endurance Expedition, it seems a miracle that these succulent mouthfuls of non-Northern fare were available in Whitehorse where I unwound for a weekend meal at Tokyo Sushi.

Shackleton and 28 men left The Endurance on October 27, 1915, when it was pinned, and later crushed, by ice floes in the Weddell Sea. They drifted on ice floes until April 11, 1916 before the winter ice broke up enough for them to launch their three small whaler boats into the floe- and berg-thick ocean. Their goal: a rocky chunk of land called Elephant Island. The alternative: drowning in Antarctica’s summer thaw. The suprise-attack enemy: thirst due to lack of freshwater ice.

As described on night three:

We were dreadfully thirsty now. We found that we could get momentary relief by chewing pieces of raw seal meat and swallowing the blood, but thirst came back with redoubled force owing to the saltiness of the flesh. I gave orders, therefore, that meat was to be served out only at stated intervals during the day or when thirst seemed to threaten the reason of any particular individual.

… The temperature was twenty below freezing point; Greenstreet’s right foot got badly frostbitten, but Lees restored it by holding it in his sweater against his stomach. Other men had minor frostbites, due principally to the fact that their clothes were soaked through with salt water.

At daylight we found ourselves close alongside land, but the weather was so thick that we could not see where to make for a landing. Having taken the tiller again after an hour’s rest under the shelter of the dripping tent, I ran the Dudley Docker off before the gale, following the coast around to the north.

This course for the first hour was fairly risky, the heavy sea before which we were running threatening to swamp the boat, but by 8 a.m. we had obtained a slight lee from the land.

Then I was able to keep her very close in, along a glacier front, with the object of picking up lumps of fresh water ice as we sailed through them. Our thirst was intense. We soon had some ice aboard, and for the next hour and a half we sucked and chewed fragments of ice with greedy relish.

Rarely has an ice-cold Kirin and a chaser of ice water felt so refreshing.

Quotes from “South: The Endurance Expedition,” by Ernest Shackleton, first published by UK press William Heinemann, 1919. There are dozens of editions of this book out there; I used the Penguin pocketbook edition from 1999.