Ice … cream provides one of the most domesticated, and delicious, relationships we have with ice. It can become a kind of crazy, rules-free relationship, too, since the combination of tastiness and the guarantee of an enthusiastic audience encourages some extreme creativity when it comes to ice cream flavours.

The winning recipe of the 3rd annual Austin Ice Cream Festival, held August 15, 2009, has been getting lots of attention lately because it wasn’t all about sweetness. Bob Blumer, host of the Food Network’s “Glutton For Punishment,” attended the festival and took home top honours with what sounds like a super breakfast, lunch, dinner, dessert, snack, or accompaniment to any sort of summery day: Bacon Maple Crunch.

Yes, bacon in ice cream. And this is a serious ice-cream making festival, look at how the rules insist on exclusive on-site ice-cream making. From http://austinicecreamfestival.blogspot.com:

Dear Contestants,
The Special Committee on Ice Cream Affairs has just adjourned. After much discussion of such things as ice cream, ice cream making, custard,etc., it was declared that premade custards or other sweet and creamy pre-prepared bases shant be allowed.

Although it was acknowledged that the on-site preparation of custard is not optimal. It was also stated that previous competitors have chose to bring out hotplates and prepare key ingredients, on site. On-site preparation of key components of the ice cream is encouraged.

Additional cooking equipment is allowed but equipment, such as burners, hot plates, or deep fat fryers will not be supplied by the Austin Ice Cream Festival.

Here’s a first for my writing career: I’m about to quote Twitter – because Blumer’s Twitter feed actually provides some information that’s relevant for more than 5 minutes. Looks like he was considering several recipes for the competition, right up to the day before:

7:05 AM Aug 14th: down to 2 finalists: roasted banana with Heath bar and cashews, and maple with maple-candied bacon. tough choice. competition is tomorrow.

2:51 PM Aug 14th: final decision: maple & candied bacon (with a bit of chipotle added to the bacon to give it another dimension and appeal to the TX palate)

Blumer’s not a complete Twitter addict, it appears, since there are no further Ice Cream Festival tweets and the next message is on Aug 20 about a completely different subject.

According to a Canadian Press article, Blumer prepped candied bacon the night before the competition, but woke the next morning to find it soggy from the humid heat. “I had this crazy idea at the last second to make a bacon brittle,” Blumer said, noting he folded the chopped bacon into a pot of melted sugar. (Clearly, we’ll save the health talk for later.)

With just a little more research I discovered that candied bacon ice cream isn’t a new thing, so it’s hats off to Blumer for bringing the ice to the next level by adding in the maple twist and the chipotle (impressive, that).

But if you’re interested in trying the candied bacon ice cream itself, chef and author of The Perfect Scoop David Lebovitz provides a step-by-step recipe (including how to candy the bacon) on his blog Living the Sweet Life in Paris. 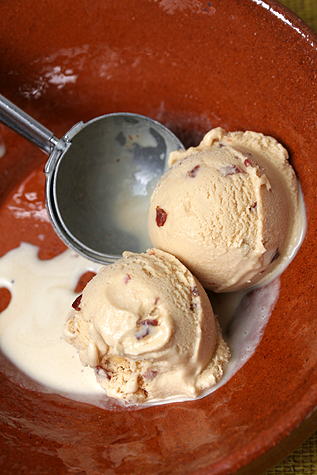