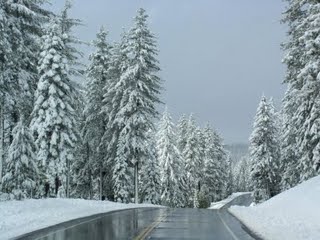 Black ice, black ice, what’s the point of having black ice around in this world?

You can’t see black ice (no points for visual pleasure) and you can’t scrape it up to put it somewhere strategic (zero points for usefulness). It’s too hard to lick (no points for enticing the tongue the way an icicle does) and it prevents ducks from walking across the road (flashback memory to watching mallards slip on an invisible sheet of ice near my grandparents’ rural driveway in Haney, BC, in the 1970s – positive points for a good memory, but negative points for interfering with wildlife).

More seriously, black ice causes a ridiculous number of driving accidents (double negative points for causing bodily harm). Look at this photo, would you even attempt to drive on that surface? On a day like this one, it would not be smart to try and hitchhike.

Of course black ice is going to exist whether or not I have an opinion on its value.

So what, exactly, is it?

Black ice isn’t really black, it’s transparent. Most ice is at least slightly opaque because of air bubbles trapped inside, but black ice forms in layers so thin that no air sticks around to act as an early warning system for us when we approach it.

Why’s black ice so thin? Often because it forms out of a tiny amount of water. Mist, freezing rain, or fog can leave just enough water on a flat surface to form an ice “slick,” if you will.

Black ice is also called glare ice, which the image above demonstrates perfectly.

In very dry climates, apparently another type of black ice can appear, according to this Wikipedia entry:

Black ice is a term also used in those geographical areas where it rarely rains. When it does rain, the oils from vehicles that have dripped on roadways float on the thin layer of water resulting is a very slippery condition. Also, some of the oils in the asphalt roadways can float on top of the water and make that road even more dangerous.

As for black ice at sea, there are two branches of definition:

1. in oceanography, black ice is to sea ice that is clear enough to show the color of the water underneath, hence it is typically “young ice“, as http://www.coolantarctica.com explains; and

2. in marine traffic, it refers to a build up of ice on vessels (back to the Wikipedia entry for this one): “Black ice is a danger for cold-weather fishing trawlers. As ice forms on its superstructure, a boat can become top heavy, and in rough weather this extra, unbalanced weight may capsize it. Thick layers of black ice can form rapidly on boats where they encounter a combination of air temperatures cold enough to freeze seawater and rough seas that splash seawater over the entire boat.”

If anyone out there has photos of maritime ice, The Ice Cubicle love to post them.

For now, photos of useless, beautiful, land-locked black ice will have to do. Even though, from everything I’ve heard and read over the years, there’s nothing to be celebrated about black ice, so I wonder why we should photograph it at all. The slippery stuff is just up to no good. Tell me what you know if you’ve heard otherwise.