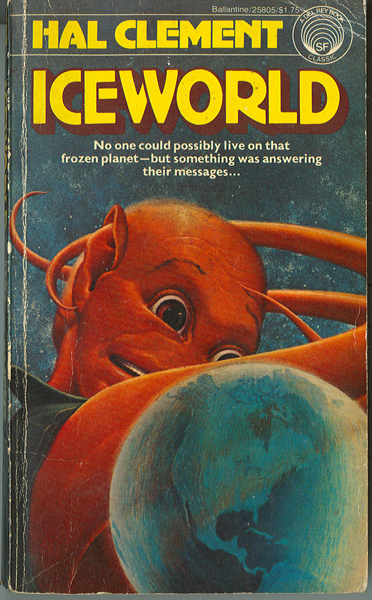 According to Hal Clement, our multicoloured planet Earth is a life-threatening, ice-cold zone for creatures who typically inhabit conditions where sulphur is liquid.

Mottled with sinister colors, the planet gleamed in the spacecraft’s viewport. Sallman Ken could not believe that such a bleak and icy globe could ever have produced life. Yet the expedition had contacted natives of some sort when it sent in unmanned landers.

Harry Clement Subbs (1922 – 2003) graduated from Harvard with a degree in astronomy in 1943. On top of learning scientific knowledge of stars, planets, gasses, temperatures and pressures beyond earth, he put the knowledge to a second use and published his first science fiction story (“Proof”) in the June 1942 issue of Astounding Science Fiction. By 1950, using the pen name Hal Clement, the SF writer’s first novel Needle came out from Doubleday.

Iceworld, Clements’ second novel, hit the stands in 1953 (published by Gnome Press, though serialized in Astounding SF in 1951 – insert big sigh here for the days when fiction writers could make a living this way!). In this tale, a group of eight-tentacled creatures from another planetary system are desperately trying to determine the source of a narcotic they’ve become addicted to through trade with the Planet of Ice, a.k.a. Earth, a.k.a. Planet Three.

The narcotic: “tofacco,” rolled into tight little white cylinders. The creatures: Sarrians, who live at 500 degrees above zero. When they inhale tobacco – which turns to gas at that temperature – it gives them pleasurable, hallucinatory dreams for an entire night, which is half the length of a regular Earth night. Sounds pretty damn fine to me.

But hold on! for Ice Cubicle purposes, where’s the ice? Well, for all the title and the description of Earth as frigid beyond belief, the best description is of snow on Mars – Earth ice is too difficult to get to.

When the hero, Sarrian Sallman Ken, walks across a Martian snowfield in an attempt to pick up mineral samples, to compare them to Planet Three samples, this is how it goes. Quoted from my Ballantine/Del Ray paperback, picked up yesterday at the Free Store at Quigley Dump, just outside Dawson City, by a friend who handed it to me as a gift when I enthusiastically burst out, “Ice! an ice sighting!”

The nearest of the white areas was perhaps thirty yards from the air lock door. Reaching it quickly in spite of the weight of the armor, Ken looked it over carefully. … The handler [a fingerlike extension on Ken’s suit] grated across the surface, leaving a brown streak behind – evidently the white material formed a very thin layer on the ground. Raising the sample to eye level, however, Ken discovered that he had nothing but dark-colored sand.

Excusably puzzled, he repeated the process, and this time was quick enough to see the last of the white material vanish from the sand grains. “You were right, Laj,” he said into his transmitter. “There’s something here that’s really volatile. I haven’t got enough for a good look, yet – I’ll try to find a deeper deposit.” He started forward again, toward the centre of the white patch.

The expanse was perhaps fifty yards across, and Ken judged that the volatile coating might be thicker in the center. This proved to be the case, but it never became heavy enough to impede even his progress. His trail was clearly marked by bare soil, as the stuff faded eerily out of sight around each footprint. Ken, though he could have looked behind in his armor without turning his whole body, did not notice this, but the watchers from the ship did. Drai remarked on it over the radio, and Ken responded:

“Tell me if it stops – maybe that will be a place where it’s thick enough to pick some of the stuff up. I’d like to get a close look at it before it evaporates. Right now, I can’t imagine what it might be, and I need information badly in order to make even an educated guess.”

Ken was not quite to the center of the white patch when Drai reported that he had ceased to leave a trail. He promptly stopped and scooped up a fresh handful of the evanescent substance. This time there was practically no sand included; the material was fully an inch deep. The mass on his handler began to shrik at once, but not so rapidly as to prevent him getting a fairly long look. It was crystalline, millions of minute facets catching and scattering the feeble sunlight; but the individual crystals were too tiny to permit him to determine their shape. It was gone before he was really satisfied, but there seemed little likelihood of his getting a better look. Somehow a sample would have to be obtained – and analyzed. He thought he saw how that might be done, but some careful preparation would be necessary. Announcing this fact over his suit radio, he prepared to return to the ship.

Perhaps, in the half-seated attitude he had been holding, his feet had been partly out of contact with the armor; perhaps in his single-minded interest in things outside he simply had not noticed what was happening. Whatever the cause, it was not until he stood up that the abrupt, stabbing blade of cold seared straight from his feet to his brain. For an instant he settled back on his prop, trying to draw he feet from the biting touch of what was supposed to be insulation; then, realizing that matters would only grow worse if he delayed, he forced himself into action. Barely able to bite back a scream of anguish, he strained every muscle forcing the unwieldy mass of metal toward the air lock; and even through his pain, the thought came driving – no wonder the trail had become narrower; the feet of his armor must be nearly at the temperature of their surroundings. From five hundred degrees above zero Centigrade to fifty below is quite a temperature gradient for a scant three inches of steel, vacuum space, fluid coils, and insulating fiber to maintain, even with a powerful heating coil backing up the high-temperature side of the barrier.

The pain grew less as he struggled toward the lock, but the fact did not make him any happier; it terrified him. If he should lose control of his feet, he would die within sight of the Karella’s crew, for there was not another suit of special armor aboard that could be worn to rescue him.

Now his face was cold, too – he must be losing radiation even through the special glass of the face plate. His tentacle tips were feeling the chill, but not so badly; the fact that the deadly whiteness had touched only the handlers, inches beyond the “inhabited” parts of the sleeve, was helping there. He had reached the edge of the area of death, and only thirty yards of bare ground lay between him and the lock. The ground was cold, too. It must be as cold as the other area; but at least it did not seem to drink heat. He was numb below the knees now; for the first time he blessed the clumsy stiffness of the armor legs, which made them feel and act like stilts; for that was all that enabled him to control the feet….Ten yards to go – five – two – and he brought up against the hull of the Karella with a clang. One more step and he was inside the lock. Two, and he was out of the swing of the massive door. With frantic haste he swung the sleeve of his armor at the closing switch. He hit it – hit it hard enough to bend the toggle, but the circuit was closed and the door thudded shut behind him, the sound of its closing coming through the metal of the floor and suit. Then came the air, automatically, pouring into the lock chamber, condensing on the body of his armor, freezing into a yellow [sulphurous] crust on the extremities. With the pressure up, the inner door swung wide, revealing Drai and Ordon Lee in the corridor beyond. The former shrank from the fierce chill that poured from the chamber; the pilot, thinking faster, leaped to a locker nearby and seized a welding torch. Playing the flame of this ahead of him, he approached Ken carefully.

And all this from a little patch of snow. I love this passage because it took me a couple of paragraphs to realize what was going on with the suit instantly melting the snow. Ken survives, and the tobacco negotiations continue a few days later when the Karella returns to the Planet of Ice, but I won’t spoiler the ending here because it’s a good read.

Clements was an early practitioner of “hard” science fiction, which tries to extrapolate off of the current scientific knowledge of any given time. He was highly successful and influential in the SF scene, writing 16 novels and many short stories, including one called “Hekla” which I now need to find because apparently it takes place on a completely frozen world.